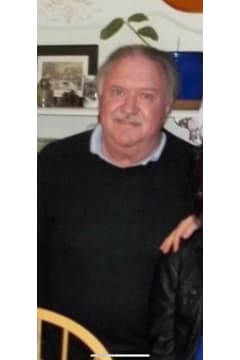 Obituary For Ronald A. Gosset

Ronald Gosset, age 73 passed away peacefully at Village House Nursing & Rehabilitation Center in the early morning hours of Friday May 28,2021.
A Warwick High School graduate, he moved to Newport, RI where he met and married the “love of his life” Linda Roderick-Rioux to whom he was married to for approximately 20 years until their divorce.
He was head of security and public relations director for the former Providence Civic Center. Additionally he owned/ operated many business’ on "the island" to include Darian Crafts, Kissin' Clean, Cuttin'Up and Omni Deck A Day. His last and greatest accomplishment (outside of his children) was the Greene Farm Subdivision resulting in Gosset's Turn Dr and Olive Way in Middletown.

He will always be remembered for his humor, quick wit, and intelligence. Always did things his way. It’s never good bye but see you later. He touched many lives with his unconventional ways. There are many that consider him “dad” as well. They are: Scott Wagner of Middletown, Josh Perham of Tiverton, Rachelle Ponton of Middletown, Ronald Ribera II of New York, Hilary Ward of Portsmouth, and Darian Neal of Fall River, MA, among others.

He is also survived by many many nieces, nephews and cousins from Providence to Alabama and Texas, as well as his brother Lee Gosset of Texas.

Predeceased in life by his mother Olive Buck of Warwick, siblings Barbara and Robert Buck.

The family will honor his request to be cremated and a celebration of life will be at a later date In lieu of flowers, donations in his memory can be made to St. Judes Childrens Hospital, or any Native American Reservation School or Camp.

The family would like to take this opportunity to thank the following:Village House, Family’s Choice Cremation, Inc., Coastline Ambulance Service, Newport Fire Dept, Portsmouth Fire Dept, Newport Hospital, Dr. Derolf Dr. Defillo, and the many many physicians, nurses, PA's, NP,s CNA's, that have cared for, rescued, driven and over all been a part of his life. Additionally, a most heartfelt and loving thank you and tribute to Christopher Cardoza who not only is his son in law but also was his caregiver for many years when Ron moved in with his daughter and he. Chris took a lot of the burden off Ron’s daughters and we are truly grateful. Thank you all for being an integral part of our lives.