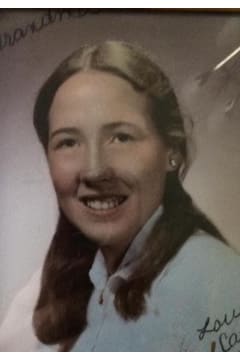 Mary Catherine Jackson age 68, passed away August 17, 2021, peacefully with family and friends.
Mary lived in Riverside Rhode Island for more than thirty-five years and moved to the Grace Barker Nursing Center in Riverside last September.
Born Newport, Rhode Island May 10, 1953. Mary Catherine (Cathy) was the daughter of the late David S. Jackson from Alabama and Mary Isabel Beaton Jackson from Nova Scotia, who settled in Portsmouth, Rhode Island in 1960. Cathy was the third child and oldest daughter of David and Isabel. She attended school in the Portsmouth school systems and graduated from Portsmouth High School in 1971, Cathy was well known and respected for her piano and ballet talents. Cathy received a Governor's Scholarship for ballet and taught modern dance at Portsmouth High School. Later she completed a CNA course and was so proud to be able to provide care to others.
Over time Cathy settled in Riverside, Rhode Island and became a devoted member of St. Brendan's Church, where she attended mass as often as she could regardless of weather. The community embraced her and watched over her to keep her safe. Her favorite pit stop was Rhodes Pizza.
Cathy is survived by her siblings Chester Jackson of Maine, John Jackson of Florida, Christine Murphy (Tina) of Rhode Island, Robert Jackson of Thailand, Elizabeth Pavao of Maine, David M. Jackson of Virginia. Her grandson Christopher Collins of Virginia and many nieces and nephews. She was predeceased by her daughter Kimberly Kathy Jackson of Florida and her brother Carl A. Jackson of Connecticut.
A memorial donation in lieu flowers may be made to the East Bay Community Action Center, 19 Broadway, Newport RI 02840
A memorial service will be held August 28th at 10 am at St. Brendan's Church, 60 Turner Ave, Riverside., Rhode Island.

A private graveside burial with the family will be held at a later date in Portsmouth, RI.