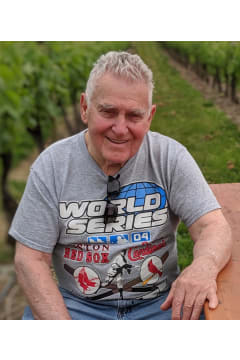 Joe "Pappy" Papp passed away on July 14, 2021 at age 80 with his children and grandchildren at his side.
Joseph was born in April 4, 1941 in Boston, MA to his parents, Joseph Papp Sr and Dorothy Salisbury Papp. He was the oldest of 7 children, preceded in death by Jimmy, Dorothy, Bobby, and George, and is survived by his sister Betty and his brother John.
Joe married his first love, Rita Crowley, in 1967. They are survived by their children, Joe Papp III and his wife Kerrie, and Mike Papp. Joe is also survived by his daughter Kimberli and her husband Mike, and his grandchildren Dryanna and Maesie, whom he resided with at the time of his death.
Joe served in the USMC during the Cuban Missile Crisis. With his military training and experience he later became a successful engineer and entrepreneur. The last years of his career were in automotive parts sales and distribution.
Joe loved sports, he played softball and was an avid golfer who enjoyed playing in several leagues with his buddies at Ridder Golf and Country Club in East Bridgewater.
Joe was blessed to have had an opportunity to see many friends and family members at his living funeral a week prior to his death. No additional services are planned at this time.