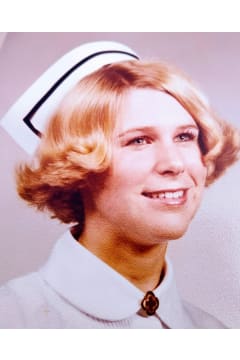 Heaven got a little brighter on March 7,2022 when Joanne gained her wings and began her next journey. Joanne was born June 12,1953, the oldest of five children Joanne always took on the role of caring for others. Taking care of people was always important to her. Joanne's education started at St. Mary's school, which she attended for eight years and then on the Rogers High School where she was elected vice president and chosen for coed colonel. She graduated in 1971.
Joanne briefly worked at New England Phone co. and D Dixon Donovan before deciding that nursing was her passion. She wanted to follow her Grandmother and Aunt Dora footsteps and continue to care for others. She enrolled in nursing school at Newport hospital and graduated in 1977. Joanne's medical career was a lengthy and impressive one. She had many roles as a caregiver starting with laboratory work then moving on to rehab nursing. She worked with brain trauma patients then took her skills to St. Clare Nursing Home. Joanne loved St. Clare and all of her co-workers but even more so she had such a special connection with her patients. She loved this age group so much that she became a gerontology specialist. She always had the patients laughing and would often joke with them about what she should expect in her twilight years. Her patients loved her and were very lucky to have someone care for them so much.
Joanne was one amazing woman. She was kind, compassionate, giving and to say she was funny was an understatementâ€¦â€¦she was hysterical! She was strong and she was a fighter so when diagnosed with breast cancer in 2008 she fought the whole way and became a breast cancer survivor. She really was a warrior! She loved to laugh with friends, dance at Mikey's shows and never turned down a karaoke opportunity. She really was a vivacious soul.
Joanne was a devoted wife, a loving proud mom, a caring daughter, a supportive and protective older sister and a genuinely amazing friend. If you knew Joanne please feel lucky and blessed to have had her in your life because people as special as her are a true gift.
Joanne leaves her knight and shining armor Michael Cassese, who has shown nothing but complete devotion and compassion for Joanne during this very difficult time. She also leaves her biggest accomplishment, her son Michael "Mikey". She was so proud of everything he did and was always his biggest fan, she loved him unconditionally and always will. Mike and Mikey will always have her whole heart because they were her entire world. She also leaves her sister Patsy/Ralph Channell, during this very tough time Patsy was instrumental in caring for Joanne showing so much care and love for her. She leaves Nancy/Chris Costello, her brother John McCarthy and her sister in law Jane Lauth. Joanne also leaves many nieces and nephews who she will sadly miss.
Joanne is preceded inn death by her father John McCarthy " Honest John" "Johnny six pack", who was a Newport fire fighter and Joanne always credited him for inspiring young men to join the brotherhood of NFD. Her mother Barbara McCarthy (Haggis) with whom she had so much fun with and shared many laughs with along their journey together. Her brother David McCarthy who she loved and cared for very much.
A celebration of life will be held this summer and Joanne promises it will be the first party she will be on time for!!
In lieu of flowers donations can be made to the Potter League in Middletown, R.I so Joanne's love for animals can live on through othersâ€¦
Joanne will be greatly missed by so many people whose lives she touched, but she leaves you with this "I look forward to meeting again where life ends and eternity begins"