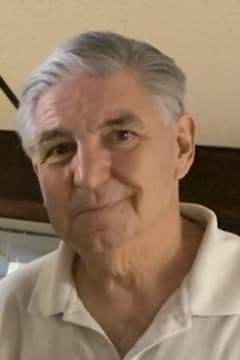 Francis “Buzz” O'Halloran of Warren passed peacefully on January 15, 2021 with his best friend by his side after a three year battle with lung cancer.

Buzz was a friendly face around town known for his quick wit, quirky love of random facts which included solving the daily Jumble in record speed.

Buzz was born on June 3, 1950 and raised in Barrington. RI. The son of the late Francis and Bertha OHalloran. Buzz was predeceased by his siblings Mary, Ann and Michael. Buzz was the father of Meaghan Ferraz and Kara Rocha. He leaves behind four grandchildren Logan, Emily, Morgan and Gavin.

A competitive sportsman, Buzz spent many hours of card and cribbage playing at the Portugese American Club where he was a lifetime member.

Buzz would like to thank all his close friends who supported him over the years including Graham Garvie, Dean Dansereau, Marilyn Collins, Karen Silvestre, Karen Kelman, CJ Audet and Jaye and Lilly Marino. Buzz would like to acknowledge Dr Teresita Hamilton MD and her staff at EBCAP for the excellent care.

A heartfelt thank you to Tom and Marie Hallock for their never ending love.. Buzz would also like to sincerely thank Steve and Michaela Balasco for forty years of incredible friendship and the best living Irish wake of all time.. An extra special shout-out to his speech pathologist who later became his best friend, Paula Burns. Francis appreciated all the love, laughter and for becoming his angel here on earth.

A toast to Buzz will be held at the PAC at a later date. Please visit Smith Funeral Home online condolences to leave a special memory of Buzzy @ www.wjsmithfh.com.